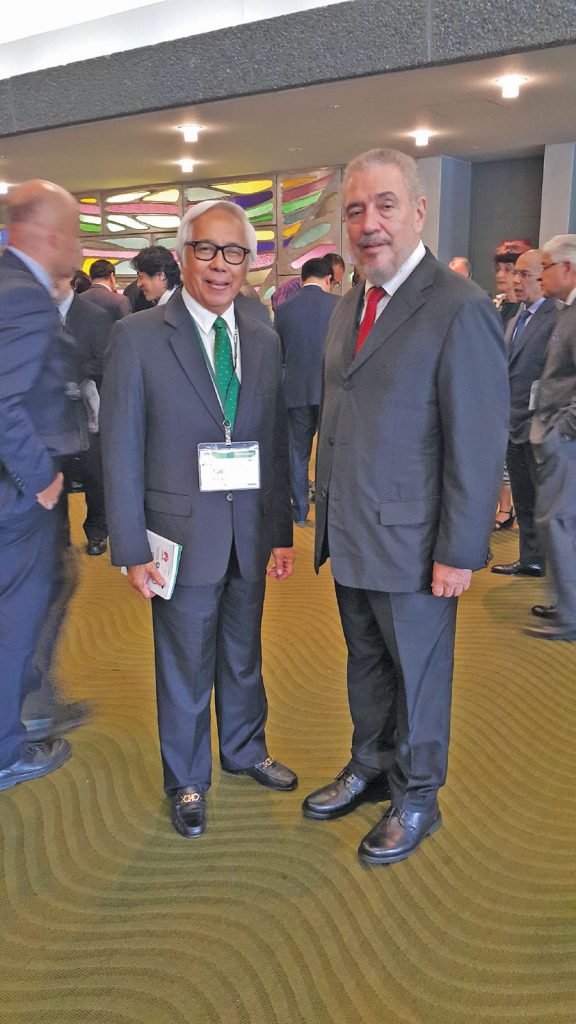 IT was one of those tragic news moments forever remembered — I was at a conference in Hawaii on Dec 8, 1980 when a bulletin came in from New York that John Lennon had died, shot at the entrance to his Manhattan apartment building.

TIME magazine’s headline said it all: “When the Music Died.” Like many ardent Beatles’ fans, I was dumbfounded and left with a profound sense of loss.

It was déjà vu all over again to be similarly shocked beyond words in recent days by the loss of two long-time friends and colleagues.

Most recent was the death of Fidel Castro’s eldest son, Fidel “Fidelito” Castro Diaz-Balart on Feb 1. Reports said he had killed himself, after suffering from depression in his last few months.

Fidelito, 68, a father of three, was scientific adviser to the Cuban government and vice-president of Cuba’s Academy of Sciences.

He studied in Cuba and Russia (where he received two degrees, including a doctorate in physics, and was fluent in English, Russian, French and Spanish), and was considered an expert in nuclear energy, nanotechnology and the biopharmaceutical industry. He regularly attended global scientific conferences and was involved in the creation of a new nanotechnology research and development centre in Cuba, which became part of an extensive global network. In Kazakhstan just last year, he was promoting renewable energy and Cuba’s innovative technologies.

The internationally-recognised excellence of his and Cuba’s scientific achievements, especially in the field of medical science, is all the more remarkable given the decades-long animosity between Washington and Havana that inhibited collaboration between Cuban scientists and their US colleagues so near.

Three weeks earlier, Kenyan-born Harvard professor Calestous Juma had died after a long battle with cancer. Calestous, 64, was remembered for his contributions to the study of technology and innovation in Africa. In 1988, before embarking on distinguished public service and academic careers, he founded the African Centre for Technology Studies in Nairobi, a pioneering group that married government policy with science and technology to spur sustainable development and foster distinctly African perspectives on science.

He received international recognition for his scholarly work, winning the 2017 Breakthrough Paradigm Award and the 2014 Lifetime Africa Achievement Prize. He also earned induction into the United States National Academy of Sciences, Royal Society of London, World Academy of Arts and Sciences, and African Academy of Sciences, among other honours.

Beyond gratitude for our friendship, I owed much to both men, whose interests converged with mine on a number of international platforms.

I worked closely with Calestous in the late 1990s when he was the founding director of the United Nations Convention on Biological Diversity (CBD) in Montreal and I was elected chair of the CBD’s Subsidiary Body on Scientific, Technical and Technological Advice (SBSTTA). It was during this time that I realised the crucial role that scientific consensus and advice could play in informing policymakers to develop sound strategies, plans and programmes in sustainable development.

Increasingly, international relations and diplomacy — once confined to diplomats and career civil servants — now involve academics, corporate figures and civil society leaders. This broadened perspective and engagement is especially important as the global community grapples with the reality of climate change and complex interlinked problems of water and sanitation, energy, healthcare, food security and biodiversity loss.

Calestous was as instrumental in advancing this evolution in policy-making as he was in convincing our then scientific colleagues to elect me and Sir Robert Watson as co-chairs of the governing board of the UN’s Millennium Ecosystem Assessment (MA). Conducted from 2001 to 2005 and involving 1,360 experts from 95 countries, it remains the largest-ever audit of biodiversity and the condition of and trends in the world’s ecosystem services.

The then UN secretary-general, Kofi Annan, in his Millennium Report, hailed the MA as “an outstanding example of the sort of international scientific and political cooperation that is needed to further the cause of sustainable development”.

The MA gave birth to the Intergovernmental Science-Policy Platform on Biodiversity and Ecosystem Services (IPBES) in April 2012, which I had the honour of chairing during its first three years.

I became friends with the junior Castro when I was working at the United Nations University in Tokyo. Fidelito had an uncanny resemblance to his famous father. Physically imposing, but, gentle and soft-spoken, he was, like Calestous, a natural “thought leader” who often spoke out on the needs and aspirations of scientists from the developing world. He was also a frequent lead speaker at the annual meetings of the Science for Society Forum in Kyoto, the scientific equivalent to the World Economic Forum conceived by the former Japanese minister of finance, Koji Omi.

It is not unreasonable to conclude that the leadership, friendship and camaraderie extended by these two iconic figures helped to advance the scientific enterprise, fostered international collaboration and promoted world peace through science diplomacy. All of us are left poorer by their unexpected departure.