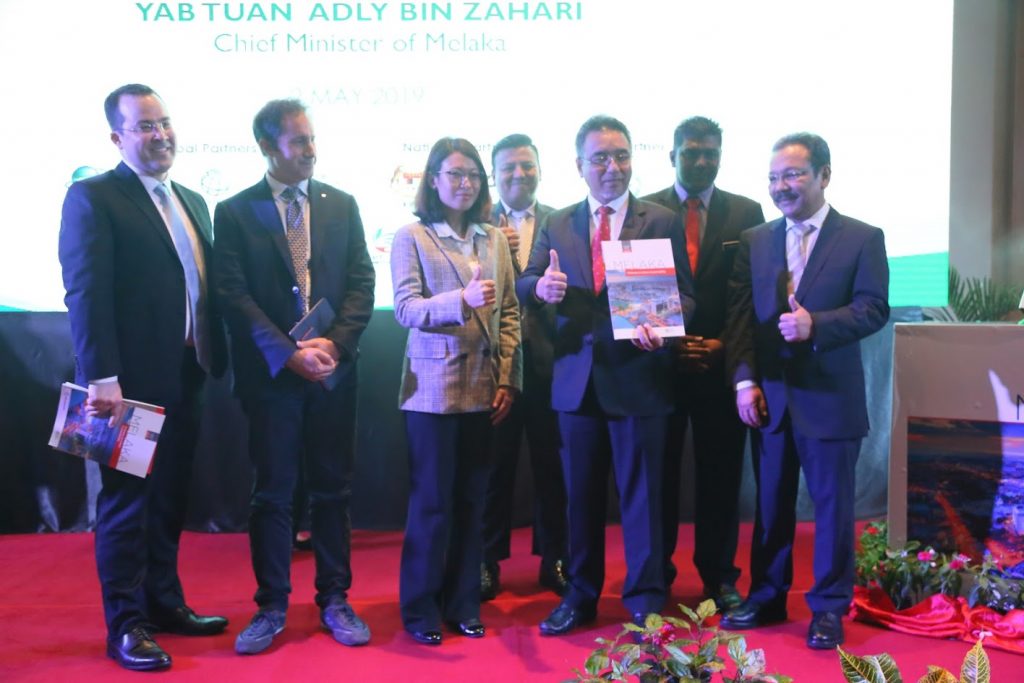 Being one of most urbanized countries in Asia, Malaysia has been a center of the global “urban migration” in the past decades. Today 75% Malaysian are living in urban areas and over 90% of national economic activity is conducted in cities. Rapid urbanization has created tremendous opportunities for Malaysian cities; but also put enormous pressure on urban infrastructure and services. Climate change further threaten the cities’ capacity to relieve the pressure. Datuk Yusoff mentioned that to tackle the challenges, the Malaysian government had demonstrated continued commitments to sustainable urban development. The eleventh Malaysian plan, the national urbanization policy and the state and local urban planning policies have laid out a policy framework for Malaysia’s sustainable urbanization.
As one of a famous World Heritage City, Melaka attracts more than 16 million tourists yearly and the numbers are growing. Apart from that, 41% of Melaka’s economic output is from Manufacturing.

Melaka produced 4.32 million tonne CO2 in 2014 and increased to 4.45 million tone C02 in 2015. 63% was contributed from building and industry sector meanwhile another 27% from transportation sector.
In order to cope with challenges and opportunities, Melaka has made many great developments toward building a sustainable, green city. Efforts namely on energy efficiency, Materai Hijau Melaka – green rating building tool certification and efforts to increase renewable energy generation and solar roof-top will be prioritise.
Through innovation, technological improvements and adjustments in its urban development practices, Melaka can be a leader in urban sustainability and a role model not only to other cities in Malaysia but Asian cities as well.
Melaka is also enlisted in the 100 Resilient Cities Programme by the Rockefeller Foundation. A resilience unit has been setup at the city level to identify shocks and stresses faced by the city due to local climatic change impact.

Due to our tremendous commitment; Melaka has been proclaimed as the national winner for the One Planet City Challenge or previously known as Earth Hour City Challenge for 2018 organised by the World Wildlife Fund for Nature of WWF.

In order to realize this vision, the Melaka Sustainability Outlook Diagnostic: Pathway to Urban Sustainability able to provide a strategic framework and guidelines for all stakeholders. The objective of report is to diagnose Melaka as competitive cities and the realization of the Melaka’s State Structure Plan 2035, which is the state’s long-term planning document.

This rapid assessment exercise of Melaka’s urban sustainability was the first initiative carried-out by the GEF-6 Sustainable City Development in Malaysia Project which is being implemented by the UNIDO, executed by MIGHT, and supported by the Global Environment Facility (GEF). Melaka’s diagnostic was performed by the World Bank’s Global Platform for Sustainable Cities (GPSC), a network which

Melaka actively participates in that has a total of 28 cities in 11 countries. Several consultations for the assessment were carried out with stakeholders, including the Ministry of Housing and Local Government, State Government of Melaka, Economic Planning Unit of Melaka, and other government agencies.

previous
Dr M: No need for high-speed rail in M'sia, yet
next
Melaka's revenue to decline if no new sources of income