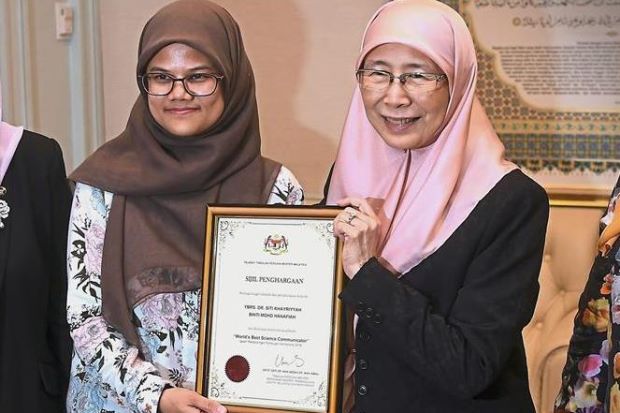 Deputy Prime Minister Datuk Seri Dr Wan Azizah Wan Ismail said the Government is proud of the achievement by the biological science lecturer, who beat 27 other science communicators from around the world to claim the title of 2018 FameLab International Champion in the United Kingdom last month.

“I am proud of Dr Siti Khayriyyah’s success, which proves Malaysians’ ability to not only compete but to win global competitions.

“She represents the quality that our people, especially women, possess. She is proof that we have what it takes to compete on the international platform,” she said after receiving the 33-year-old at her office yesterday.

At the competition, the young lecturer and researcher spoke on tuberculosis control in front of a live audience at the Cheltenham Science Festival held at the Arena in Cheltenham, UK.

“Science communicators can help make science simple and pala­table enough for the laymen to understand. If this can be done, I believe more people will appreciate science.

“Also, with sufficient support and resources, I hope to continue my research in tuberculosis diagnostics,” she said.

Since 2005, FameLab has grown into a leading science communication competition.

A partnership with the British Council since 2007 has seen the competition go global with more than 10,000 young scientists and engineers participating to-date.

In Malaysia, FameLab is co-organised by British Council and Malaysian Industry-Government Group for High Technology (MIGHT).

The Malaysia National Final was held in May where 10 finalists took stage in front of an audience of 400 people.

previous
Sustainable development goals: Are we on track?
next
Is Malaysia ready for gene therapy?