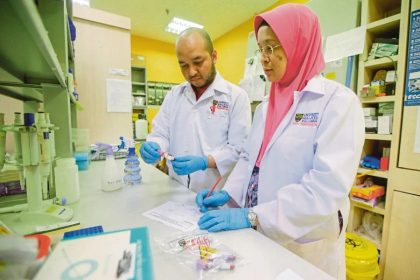 COMMENTS are often made on the need for countries to invest in research and development (R&D) if they aspire to make progress on their socio-economic development.

It’s a viewpoint widely shared given the economic examples of countries such as South Korea, where about 4.3 per cent of its gross domestic product (GDP) is spent on R&D, and China, where R&D spending hit a record high of 2.19 per cent of its GDP last year.

A recent study found that a one per cent increase in R&D spending could grow the economy by 0.61 per cent. This means that the more a country invests in R&D, the faster its economy will grow.

Although Malaysia’s stated ambition is to spend two per cent of GDP on R&D by 2020, today we spend about 1.3 per cent of our GDP on R&D and it’s highly unlikely that we are going to achieve our target soon.

We all have a great stake in the government’s efforts to reassess the ecosystem of our R&D governance to ensure that science, technology and innovation (STI) effectively contribute to our socio-economic development.

These funds are intended for the universities to further enhance R&D through collaborations with agencies, both locally and overseas, for high-impact research and innovation.

This is a welcome gesture despite the budgetary constraints that the country is facing. Putting a substantial amount of R&D money into public research universities is common worldwide.

In fact, in some countries there are dedicated ministries of higher education and research established to foster R&D. These include Algeria, France, Indonesia, Jordan, Tunisia and the United Arab Emirates. And in Japan, there’s MEXT – the Ministry of Education, Culture, Sports, Science and Technology.

According to an announcement made by MESTECC Minister Yeo Bee Yin, during last year’s World Engineering, Science and Technology Congress, at least 50 per cent of 2019 R&D funds allocated to her ministry will be spent on experimental research.

“If Malaysia wants to be a leader in creating new technology that is needed by the society and is profitable, we have to work towards the direction where R&D is no longer limited to the academia.

“Instead, it will be done through collaboration with the industries,” she said.

“As a government, we are not here to make money, but to create an ecosystem that encourages industries to thrive and allows talents to grow,” she said.

“R&D in Malaysia focuses on academic research, but the outcome of the research is not used in related industries. This has deterred the development of advanced technologies and products.”

Indeed, the MOE and MESTECC are not the only ministries that administer R&D funding. Also involved are the ministries of Agriculture and Agro-based Industry, Health, and International Trade and Industry, to name a few.

In most cases, the problems to be solved are not stand-alone but cross-sectoral and multidisciplinary. Ministerial silos need to be dismantled and a common platform established to catalyse, promote and facilitate cooperation among researchers from academia, government research institutes and the private sector.

A study commissioned in 2011 by the then-National Research and Science Council proposed a centralised research management agency (RMA).

This was strongly endorsed by subsequent studies, including one by the Paris-based Organisation for Economic Cooperation and Development in 2016, and another by the Economic Planning Unit (EPU) in 2017.

The RMA would manage allocations of research funding based on an efficient and transparent selection of proposals and evaluation of results, and to reform and modernise public research institutes based on an assessment of their mission, competencies and governance.

The agency could be parked at the EPU or be a stand-alone, like the highly successful National Science Foundation (NSF) in the US. Created by the US Congress in 1950, the NSF is an independent federal agency to promote the progress of science, advance national health, prosperity, welfare, and national security.

The NSF supports basic research to create knowledge that transforms the future. This type of support is a primary driver of the US economy. The setting up of the RMA was even announced by Prime Minister Tun Dr Mahathir Mohamad in his mid-term review of the 11th Malaysia Plan last October. It now needs to see the light of day.

Long overdue, such a mechanism is widely seen in scientific circles as a key to spurring the innovative R&D needed to enhance our national prosperity. Countries that spend too little, or unwisely, in these areas can find themselves in the economic backwaters.

We look forward to the creation of this important mechanism, and in turn to the greater fulfilment of Malaysia’s creative and economic potential.