Melaka’s revenue to decline if no new sources of income 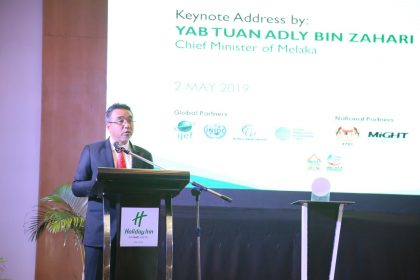 MELAKA, May 2 (Bernama) — Based on the report, “Melaka Sustainability Outlook Diagnostic: Pathway to Urban Sustainability”, the revenue of the state government will experience a decline without new sources of income, said Chief Minister Adly Zahari.

He said new sources of income are badly needed such as in the ports industry and industrial sector to ensure that the issue of income declining and state expenditure involving operations increasing annually does not occur.

He also said Melaka needs to undertake more aggressive development in various existing sectors, namely manufacturing and tourism, alongside new ones such as ports to enhance the state’s revenue in the future.

“Meanwhile, one of the methods to increase the state’s revenue is through more aggressive development as over the past few years in Melaka, progress in the industrial sector for example, has not matched that of housing,” Adly told reporters after launching the report here today.

The report took about two and a half years to compile by MIGHT, PTHM, Global Environment Facility (GEF), the World Bank and the United Nations Industrial Development Organisation (UNIDO).

Adly said the report would become the guideline for the state government to prepare the State Structure Plan Melaka 2035.

At the same time, he said the report is important as it is a document that adds value to Melaka towards the efforts at attracting more investments in the future.