Man of the people 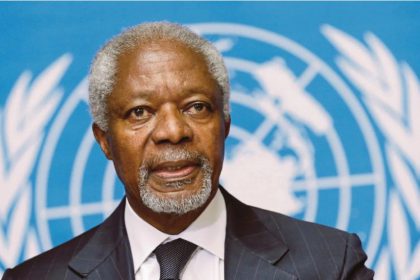 A global outpouring of well-deserved tributes marked the passing of Kofi Annan, the former United Nations secretary-general and Nobel Peace Prize laureate, who died on Aug 18 following a short illness at age 80.

As his UN successor, Secretary-General Antonio Guterres, said: “In many ways, Kofi Annan was the United Nations.”

Annan was sworn into office in 1997 by none other than distinguished Malaysian diplomat, Tan Sri Razali Ismail, when the latter was president of the UN General Assembly. Annan served in the top UN post for nine years.

During his distinguished career and leadership of the UN he was an ardent champion of peace, human rights, and the rule of law.

My tribute to Annan relates to his historic legacy as an advocate of sustainable development, a concept first articulated in 1987 as “development that meets the needs of the present without compromising the ability of future generations to meet their own needs”. Annan’s leadership on the issue soared during the Millennium Summit in September 2000 when he issued a report entitled We the peoples: the role of the United Nations in the 21st century.

The report called on member states to “put people at the centre of everything we do. No calling is more noble, and no responsibility greater, than that of enabling men, women and children, in cities and villages around the world, to make their lives better”.

In the report’s final chapter, Annan called to “free our fellow men and women from the abject and dehumanising poverty in which more than one billion of them are currently confined”.

The summit adopted the Millennium Declaration, which was subsequently manifested by the UN Secretariat as the Millennium Development Goals in 2001. The initiative contributed to significant gains in health, education and human welfare in many countries around the world. Such was its success, the world adopted a sequel — the even more ambitious Sustainable Development Goals —in 2015.

Similarly, the 2002 United Nations World Summit on Sustainable Development in Johannesburg proved to be one of Annan’s defining moments. In a vital speech to world leaders, he further underlined five specific areas where concrete results are both essential and achievable:

HEALTH: To address the effects of toxic and hazardous materials; reduce air pollution which kills three million people each year, and lower the incidence of malaria and African guinea worm, which are linked to polluted water and poor sanitation

AGRICULTURAL PRODUCTION: To work to reverse land degradation, which affects about two thirds of the world’s agricultural production

BIODIVERSITY AND ECOSYSTEM MANAGEMENT: To reverse the processes that have destroyed about half the world’s tropical rainforest and mangroves and are threatening 70 per cent of the world’s coral reefs and decimating the world’s fisheries.

Annan’s “WEHAB” agenda (an acronym of the five-point priority list, also given to mean “We inhabit the Earth”) was about having safe, clean water to drink, about utilising energy in a sustainable way in our businesses and industries, about enabling people to have heating, and lighting, and to cook in a way much less damaging to the environment, about good health wherever you live, and about meeting humanity’s land needs while preserving the biodiversity needed by our planet.

It reinforced a global commitment to development to ensure a sustainable relationship between nature’s resources and human needs.

And it resolved to build a humane, equitable and caring global society cognisant of the need for universal human dignity.

Annan has kind words for Malaysia. In a lecture in Kuala Lumpur in 2007, he said, “Malaysia has been a very fortunate country because of the way it has developed from its inception as a nation.

“Malaysia has, uniquely in the annals of empire, a tranquil and orderly transfer of power. Nationalist passion was channelled through town council elections under colonial supervision rather than down the barrel of a gun. This gift of peace has been carefully nurtured and preserved.” His words ring true even today.

In awarding him the Zayed Prize for Global Environmental Leadership in 2005, the jury had this to say about him: “One person has done more than most to catalyse political and public opinion to an understanding that the environment is a fundamental pillar of sustainable development. That person is Mr Kofi Annan.”

He truly was a giant of a man. But full of humility and pragmatism as reflected in this simple quote: “To live is to choose. But to choose well, you must know who you are and what you stand for, where you want to go and why you want to get there.”

The writer, a former Director at the United Nations University in Tokyo, was corecipient of the 2014 Zayed International Prize for the Environment (science and technology)