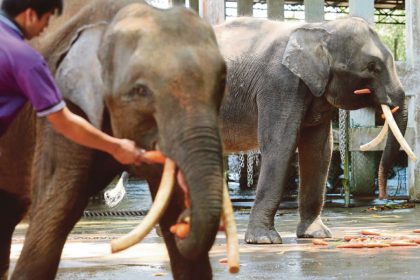 AN almost immediate challenge to Sabah’s newly installed government is a seemingly local problem, but, with national and global implications: how to ensure the ultimate survival of Borneo’s unique pygmy elephants.

Last week, Sabah again made international headlines with news of the death of six pygmy elephants in several different oil palm plantations, the latest of the endangered creatures to perish as their rainforest habitat continues to shrink.

According to Sabah Wildlife Department director Augustine Tuuga, the carcasses did not have any signs of gunshot wounds and he theorised that they could have been poisoned accidentally by plantation fertiliser. Some conservationists said the creatures might have taken drinks from the poisoned watering hole.

Late last year, three other elephants were killed by poachers; in 2013, 14 were found dead in Sabah and were thought to have been poisoned.

Pygmy elephants are threatened by widespread logging of their natural habitat to make way for lucrative oil palm plantations, and are targeted by poachers as their ivory fetches a high price on the black market.

A herd of pygmy elephants feeding by the banks of the Kinabatangan River is a sight to behold. They are baby-faced with oversized ears, plump bellies and tails so long they sometimes drag on the ground as they walk. Pygmy elephants are unique to Sabah and it will be an act of tragic neglect and omission if we fail as stewards and pay little attention to their survival.

As the Malay saying goes, “Tak kenal maka tak cinta” (you won’t love them if you don’t know them). We need more research to understand these animals better and thank those meeting that need in Sabah.

The Danau Girang Field Centre (DGFC) located in the Lower Kinabatangan Basin is a collaborative research and training facility managed by Sabah Wildlife Department and Cardiff University. The centre is also generously supported by the Sime Darby Foundation.

According to the DGFC director, Dr Benoit Goossens, understanding the pygmy elephants’ origins and past demography would be useful for the development of a long-term conservation strategy. The centre, with partners including the Sabah Wildlife Department, is drafting a 10-year action plan to protect the elephants.

He said there were fewer than 2,000 pygmy elephants living in an increasingly fragmented environment. There have been, for many years, two competing theories on the elephants’ origins: they could have been introduced by humans (records from the 1600s show neighbouring sultans offered elephants as gifts to the Bornean sultans), or they could have diverged from Asian elephants a long time ago.

About 15 years ago, a genetic study showed that Bornean elephants’ DNA differed significantly from that of Asian elephants. A joint research team of experts from Portugal, France, Wales and Sabah, including Dr Goossens, recently published a study in Scientific Reports saying that the elephants may have arrived on Borneo at a time of the last land bridge between the Sunda Islands in Southeast Asia.

“Then we compared the results from these models with existing genetic data, and used statistical techniques to identify the scenario that best explained the current genetic diversity of the elephant population in Borneo,” Dr Goossens says.

Their conclusion: the most likely scenario was a natural colonisation of Borneo around 11,400 to 18,300 years ago. The period corresponded to a time when the sea levels were very low and elephants could migrate between the Sunda Islands.

Such an illustrious history for a special group of animals is not only a source of pride for Sabahans but for all Malaysians. Indirectly we are also the custodians of these unique and majestic animals for the rest of the world to appreciate and wonder.

Therefore, it is reassuring to know that one of the earliest public statements made by Sabah’s new chief minister, Datuk Seri Mohd Shafie Apdal, was to assure the rakyat that the state government was committed to the preservation and conservation of wildlife and natural resources, and to back that with the necessary political will “to push through more drastic measures that would affect big logging companies and plantations”. Furthermore, short and long-term measures to mitigate human-elephant conflicts must be put in place.

Time is running out for the pygmy elephants. Surely we do not want to see what happened in 2015 when the Sumatran rhinoceros was declared extinct in the wild in this country. Malaysia takes pride in being one of the 17th mega-diverse countries on Earth. Let’s ensure the precious pygmy elephants of Borneo continue to be one of our greatest emblems of that status.

Zakri Abdul Hamid r is a Langkawi Award laureate and was the first Asian ever elected Chair of the Subsidiary Body on Scientific, Technical and Technological Advice of the UN Convention on Biological Diversity